Put Your Mind to It, Break a Sweat


Last Friday Mario Lopez (aka A.C. Slater from Saved by the Bell) came to the gym at my office to participate in two exercise classes.

I know what you're thinking: 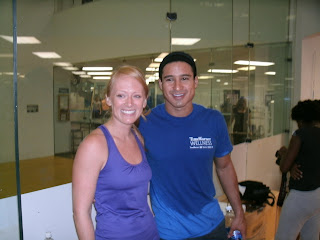 I could bore you with all of those details, but what's the point? When it comes to anything that has to do with Saved by the Bell, you shouldn't think too much about it, you just go with it. I obviously jumped at the chance and signed up immediately if for no other reason, then it would at least give me something to write about.

After plenty of email conversation about what I should wear (A thong? My birthday suit? Acid washed pleated jeans and a hot pink wife beater?) or what I should say to him should an opportunity for conversation arise (How did it feel to always be in Zach Morris' shadow? Are your dimples surgically enhanced?, Do you really think "there's no hope with dope?"), I arrived at the class ready to get fit with Mario Lopez.

There was an adequate amount of fanfare, the amount you might expect for a child star turned entertainment journalist turned reality star's appearance at a corporate health club, complete with security standing by in case anyone got out of hand.

I checked in for the class, grabbed my weights and found a spot on the floor, chuckling to myself at the palpable sense of excitement permeating the class. Why were we so excited about exercising with a B-level celebrity? I was seeking material to write about, but what was in it for everyone else? Does Mario Lopez have this much of a following?

I glanced at a girl standing to my left one row back from the front and noticed she was wearing a "Bayside Tigers" wife beater in honor of Slater's visit.

I smiled at her and her attempt to be clever, but then turned instantly cynical and downright mean inside my head.

How dare she use this shameless technique to get Mario's attention?! I pictured her buying the shirt on eBay and setting it aside, keepi 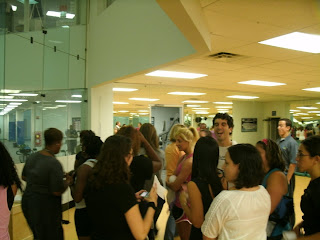 ng it special for this very day. What did she think was going to happen? That he'd see the shirt and the two of them would be instant best friends?

I was embarrassed for her, and embarrassed that the rest of us had to be associated with her and that silly little shirt.

Her stunt reminded me of woman at Jerry Seinfeld's stand-up act a few years ago who slid a black and white cookie inside a plastic container onto the stage at the Fox Theatre. She stood there waiting for him to notice, pointing wildly at the cookie and acting like a complete idiot.

When Seinfeld couldn't ignore her anymore, he picked up the cookie and said, with his impeccable timing, "Ahh, yes, a black and white cookie. I was there when they wrote that joke."

I'd hoped Mario might react the same way to this girl and her Bayside shirt, but he didn't seem to notice her, her shirt, or anyone in the class for that matter. In fact, he said nothing from the time he entered the room until the end of class, when he reluctantly waited to take pictures with his adoring fans, and those of us who were just looking to something to blog about.

And that was it. Hardly the exceptional workout experience that was advertised, but it's nice that I will be able to live the rest of my life knowing that I worked out with A.C. Slater.

Posted by Stephanie Gallman at 1:55 PM