DAY TWO: Check Out How Awesome I Am!

What's that phrase, "If a tree falls in the woods and no one hears it, does it make a sound?" Couldn't the same thing be said about keeping a blog, "If you write a blog and no one knows about it or reads it, are you really a blogger?"

I don't know. But I'm not taking any chances.

If you're reading this right now, you've fallen prey to the shameless self-promotion of my blog.

The plan here is to tell enough people about the blog that there is no way I won't keep up with it. I've used this tactic before and I find it to be the most effective motivator when trying to achieve a personal goal. When I was in college I told anyone that would listen to me that I was running a half-marathon over Thanksgiving break. I hardly trained at all and as the week of the race approached I considered backing out. Fearful that I would return from the holiday to a barrage of questions about how the race went, I forced myself to run it. It hurt, but telling people that I didn't go through with the run would've hurt more.

So I decided a variation of this approach was the way to go. This time around, though, it had to be bigger than just telling a few college friends. I had to blast this blog into the world wide web. So I did what an natural social media user would do. 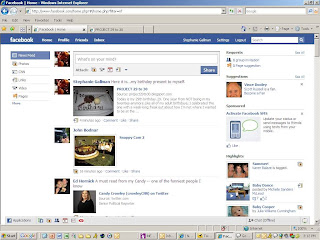 I posted it on the breeding ground for self-promoters: Facebook.

Since joining Facebook a couple of years ago, I've been amazed at how unabashedly people throw up links to their band's website, invitations to their company's group or a link to an article they've written. I mean this is the future of public relations and marketing, I get it. I just haven't yet been ready to participate. I still think that I'm going to get discovered cruising through an airport terminal, so maybe it's time I change my way of thinking and put it all out there.

Don't get me wrong, I willingly set up a Facebook account and have had fun catching up with old friends...all 600+ of them. But put it all out there? It's a challenge for me. I tried to sell concert tickets via Facebook over the summer and had a Category 5 freakout that all of my Facebook friends would know what kind of music I listen to. It's so nerve-racking. And sure enough, the comments immediately followed.

It's not that I disagree with sharing one's successes with a larger audience. Maybe we all need a little bit more of that in life? I mean the economy may be in the crapper, but at least Robin's kids learned to swim today and Johnny's performing comedy tonight at The Laugh Factory. Let's all support him! I just haven't had anything "post-worthy" to put out there . . . until now. Let's be honest, "Stephanie showed up to work on time!" and "Stephanie will be attending her 7th wedding of the summer and will likely demonstrate her stellar moves on the dance floor!" are not as cool as "Stephanie has her very own blog now. Check it out."

So I posted it. And immediately started sweating. Then I started hitting refresh and watching the comments start pouring in.

"Very inspirational"
Thanks so much!

"You should set up a fan page on Facebook so that I can follow you daily."
What? I don't know what that is. But, ok?

"Steph, You're crazy."
I know. I was always crazy. Now I'm just blogging about it.

The responses, for the most part, have been extremely encouraging. It still makes me feel very vulnerable to have it out there for the whole world to see. And I'm sure my family will shake their head in disagreement about what I'm about to say, but it IS hard for me to talk about myself in this way, and talk about something that I'M doing. I'll tell stories all day long, but promote myself and outwardly be proud of something I've done? Totally different story. The insecure 13-year old in me still wonders if people are sitting back laughing at me thinking that this idea is ridiculous. 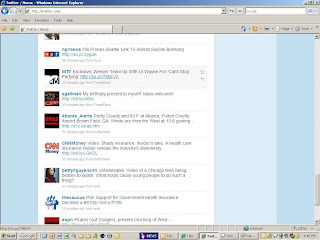 Then, it was off to the Twittersphere, a place that I still don't completely get or agree with, but I have an account so I went for it. I've been a big fan of "re-tweeting" other people's tweets. For those of you unfamiliar with the Twitter talk (congratulations, by the way, on that), re-tweeting is essentially like an email forward. You are sending on someone else's tweet. This time, though, it was all me.

Not as much immediate response with Twitter, but the possibility for crazies seeing this blog just increased 1000%.

Lastly, and surprisingly MOST challenging, I composed an email, blind copied my entire address book with a brief explanation of what I was doing and sent it flying to all the people that I REALLY know and who REALLY know me. Friends, parents' friends, ex-boyfriends, people I haven't talked to in years. I suspect some hit delete without even opening the email. I immediately heard from some offering their ideas (please keep them coming) and others just sent along their encouraging words. Some have already emailed me today, demanding to know where day #2 is. Thanks for your support, but cut me some slack already! I'm a new blogger.

So, it's out there. Everyone knows and everyone can judge. Today, I promoted myself and my HUGE, AWESOME project. Yah me!
Posted by Stephanie Gallman at 8:24 PM